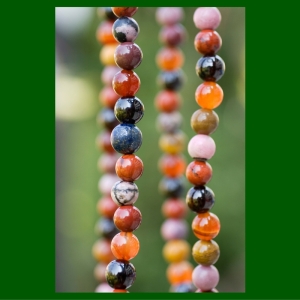 As part of his recovery from sexual addiction and sexual compulsive behaviors, my husband has been learning to identify and feel his emotions. For me, this stuff is incredibly easy, but not so for my husband. He spent 50 years trying to numb his pain from his childhood sexual molestations. As a result of his pain-numbing, he actually buried nearly all other emotions, as well. It has been an interesting journey for us both as my husband discovers his emotions.

Let me share a story that illustrates what happens as my husband works on his emotional sobriety.

We live a bit of a distance from the temple, so I brought some casual clothes that I could wear after an early-morning temple session. I changed my clothes at my husband’s office and got ready for shopping while we were still in the city. I took off my nice long beaded necklace and draped it over my husband’s office chair. We were in a hurry and I guess I forgot to pack my necklace for the return home, so it remained on the chair over the weekend.

My husband didn’t report to his office until late afternoon when he discovered my necklace. He thought it would be a good joke to wear the necklace around his neck as he used FaceTime to contact me. I did have a nice laugh when I saw this big burly husband of mine with a dainty little necklace adorning his rugged plaid work shirt. After enjoying our little silliness, we discussed some mundane details for the rest of the day for several minutes. Then we ended the FaceTime call.

You’ve probably already guessed what happened. My husband forgot the necklace was still around his neck! He finished his office tasks and then left to pick up items he had ordered from one of his vendors. This particular vendor is one that my husband has done business with for many years. The clerk that assisted him was someone that knows my husband well.  As they finished the transaction, the clerk smiled and said, “Nice necklace.”

This is when the miracle in the story begins. Later in the day, my husband described to me how he felt this weird emotion when he realized he was wearing the necklace. “I think I was embarrassed!” he explained. “I don’t remember feeling embarrassed before. I used to just get defensive and lie, but instead I simply explained to the clerk  the truth about how I ended up wearing your necklace!”

I know, it’s seems like a really small thing, but in my world, this is really big. This is a sign of true recovery, not just the ability to abstain from lust and sexual compulsions, but the ability to connect with emotions. According to Dr. Ingrid Mathieu, “Sometimes emotional sobriety is about tolerating what you are feeling. It is about staying sober no matter what you are feeling. . . . It means that you don’t necessarily need to do something to make the feeling go away” (Psychology Today, July 2011).  My husband used pornography and lust to make his feelings go away. Now, he is learning to feel and deal with his emotions.

9 thoughts on “Emotional Sobriety and The Necklace”